After the resounding success of the first Reedart Painting Holiday in Umbria, Italy in early 2006; Alan and Susan found themselves back in the region just a few months later in search of reference for a commission Alan had been contacted about. It was also an exciting opportunity for Alan and Susan to return to their beloved Italy and spend a week eating, drinking, exploring and sketching.

Their starting point was Umbria, where Alan would sketch the beautiful Casa Panfili owned by Alastair and Betty Stuart. After one night here the couple moved on to San Quirico d’Orcia in the Province of Siena, Tuscany to meet up with their dear friends Jonathan & KarenMarks. The group were staying in the Hotel Relais Palazzo del Capitano, a stunning boutique hotel set in a 15th century mansion, and spent the next two days eating, drinking and exploring the distinctive hilltop towns of Pienza, Siena and Montalcino.

Foodies Alan and Susan thoroughly enjoyed the local cuisine, sampling everything from antipasti and steak to fresh white truffle pasta.

After a long day of exploring the various hilltop towns in the area, Alan and Susan headed straight for the tranquil gardens at their hotel, the Hotel Relais Palazzo del Capitano in San Quirico d’Orcia to relax. This trip was a perfect opportunity for Alan to sketch some of Tuscany’s unspoilt countryside and became a popular new addition to his burgeoning Italian Collection at the time.

The next stop on their week-long trip was to Colle di Val d’Elsa in the province of Siena, Tuscany.  Alan’s brother Phil had worked at local Michelin star restaurant Arnolfo for a summer in 1992 and therefore they decided to drop by to introduce themselves. Despite not feeling quite as dressed for the occasion as they hoped, Alan & Susan were warmly welcomed and enjoyed a truly unforgettable Michelin star meal at the restaurant. 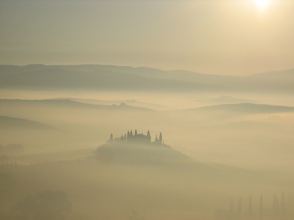 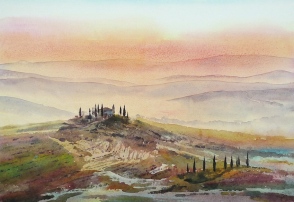 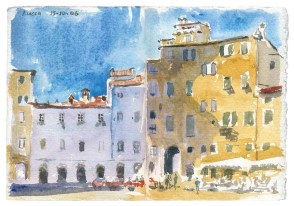 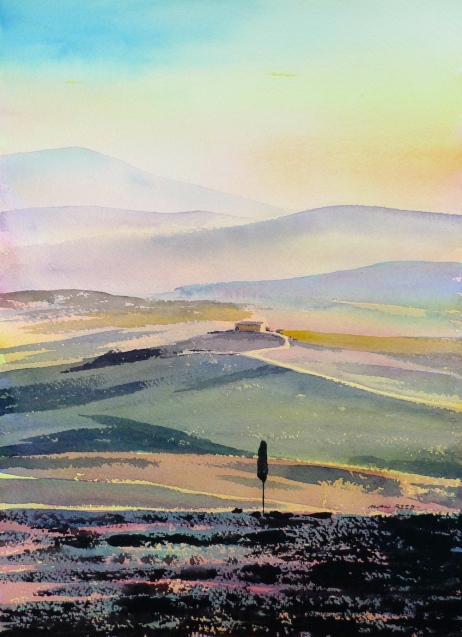 The evening sunlight near Pienza, a sketch by Alan Reed

The last stop on this particular trip was to Lucca, a picturesque city which lies alongside the Serchio River in Italy’s Tuscany region. Renowned for its impressively preserved city walls which date back to the Renaissance era, the group couldn’t resist taking part in a popular tourist pastime of cycling around the city walls which overlook the historic city, cobbled streets and beautiful tree-lined paths.

Another wonderful trip exploring more of Italy’s tourism and hidden treasures, Alan and Susan returned home to their gallery in Ponteland.

PART 2:
After a busy year travelling to and from Italy in 2006, Alan and Susan did not return to Italy until May 2007. This time, it was for a very special occasion!

A studio painting of Susan by Alan Reed inspired by the Sargent exhibition. 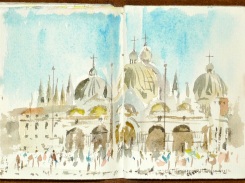 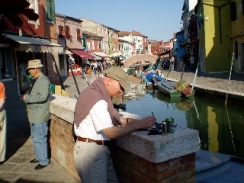 The couple were jetting to Venice with their friends John and Liz Wilthew their friends from church who were celebrating a rather special wedding anniversary. Having never visited Venice before, John and Liz were certainly in good hands with Alan and Susan as tour guides. As it was a special occasion, the group stayed at La Calcina Guest House – also known as Ruskin’s House – which boasts beautiful views of Venice and a superb terrace on the water.

How better to enjoy their first trip to Venice than with coffee in the piazza at Café Florian, an evening at the opera at the iconic La Fenice opera house – and for Alan – the chance to see an exhibition of one of his favourite artists: John Singer Sargent at the Museo Correr was unmissable!  For Alan and Susan, it was a pleasure to be back in Venice catching up with old friends – especially Nai, whom had become almost like family over the years. This trip to Venice was also a perfect opportunity for Alan to commission something special of his own…

A visit to the Il Mercante Veneziano resulted in a beautiful hand-crafted leather sketchbook which Alan had made for his wife Susan. Every page, to this date contains a painting based on a memorable event or trip from when they met in 1990 to 2007.