Touching down in the beautiful Côte d’Azur, Nice in March 2005, Alan and Susan picked up a hire car and headed an hour’s drive away across the borders to Liguria – also known as Italy’s Riviera for a week-long trip of research and getting reference.

The couple had booked a space at the hugely popular La Dolce Vita event in London (a three day event hosted by Italy magazine aimed at promoting all things Italian) later in the spring, so their trip to Liguria would be a fantastic research opportunity for Alan to sketch and add to his collection of Italian paintings which he would be showcasing at the La Dolce Vita event. Despite its reputation as a jewel in Italy’s coastline, Alan and Susan arrived in Liguria on a dull, grey rainy day.

They had decided to book a hotel once they arrived, giving them more freedom and scope to explore the area but with the weather being so bad they decided to drive to their next destination and see whether they could check in at their hotel a few days early.

As luck would have it, heading straight to Alba turned out to be the best decision they could have made… Stopping for directions on the way, Alan and Susan were told “you will eat well” in Alba, and they certainly did! Alba is known for its slow food movement – no fast food culture grows here, but instead an appreciation for seasonal, organic local produce.

As Alan and Susan would discover, there were no menus in Alba’s Osterias. Instead, you were served what was seasonal and fresh that day – like pizza topped with deliciously soft stracchino cheese which is unavailable to buy in England due to its quick sell-by-date.

The couple still vividly remember one favourite Osteria Sognatori in Alba where they were treated like old friends and served a culinary feast of antipasti, salami, cheese, pasta and ravioli to start, before moving on to a main of meat and fresh vegetables served with local wine. Finishing their meal with coffee and the customary grappa, Alan and Susan were amazed to find the whole meal at Osteria Sognatori cost just €45.

Alan and Susan spent the remainder of the trip in the Piedmont region of Italy driving to nearby hilltop towns of Bra, La Morra, Neive, Mango and Nebbiolo, stopping to visit their hotel owner’s vineyard in Barolo in between and sampling some fantastic local produce to bring back home.

Picking up salami and cheeses at various other stops on their trip, Alan and Susan were taken aback by the beautiful scenery in the Piedmont region.

Six days of adventure passed all too quickly and it was time to head to the airport via Liguria and Monte Carlo – but not before Susan stopped a local fisherman to ask where they might find the best seafood restaurant in Noli, Liguria to enjoy one last fantastic meal here.

With a sketchbook full of reference of vineyards, street scenes, rich Italian landscapes and a head full of memories of bustling streets lined with wine bars and friendly locals who “never get English people here” – Alba was not yet on the tourist radar, but Italy enthusiasts Alan and Susan had certainly discovered a true hidden gem.

Fast forward from March to September 2005 and Alan and Susan were packing their bags for Italy once again. Thanks to an influx of incredibly cheap Ryanair flights during this time, there was no excuse not to, and so the couple booked to stay at La Mason, a complex of apartments near Verona.

Landing in Bergamo, they headed for the Veneto along the motorway following La Serenissima, once an ancient trade route between Venice and Milan. They spent 7 days exploring the area. Travelling off the beaten tourist track,  Alan and Susan also discovered one of the most incredible seafood restaurants they had ever eaten at.  Said to be a favourite of one of the famous Formula 1 champions, they were in good company as they dined at Il Tenere where the owner, an enormous hulk of a man sat down in front of them and asked them what they wanted. Instead of being presented with menus, they were treated to an incredible meal of fresh fish and local wine. 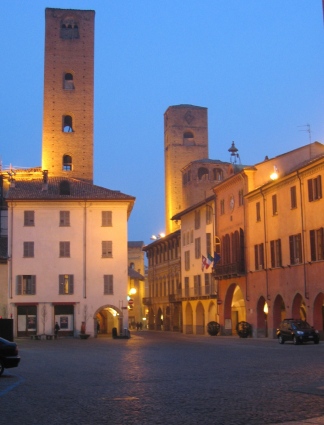 Such is the life of an international artist,  Alan visited the historic towns of Marostica, Asolo, Asiago, Padua and Vicenza on this particular research trip.

Providing him with an abundance of reference for a forthcoming exhibition, the trip was also a perfect opportunity to meet up with their old pastor Paul in Marostica and Alberto Brazzale, the publisher whom they had met a year earlier in Rome.

Working on location, often battling against quickly fading light conditions gave Alan’s work a painterly sense of immediacy and energy. Painting directly with his paintbrush using watercolours rather than pencil or charcoal gives Alan’s work a truly distinctive style enjoyed the world over – from their gallery in Ponteland to London’s La Dolce Vita and even at the airport in Italy!

“We try to make two working trips to Italy each year, every trip is different and deepens our love affair with the country.”

From the very first Italian Collection of paintings assembled on his very first trip to Venice in the early 90s, to an ever-expanding collection over ten years later, Alan Reed Art had certainly seen The Light when it came to focusing on Italy as a collection of paintings, not least because it meant jetting off to Italy for research purposes, painting on location and getting to uncover some memorable hidden treasures, but more on that later…

One thought on “A Foodies Paradise”

Sketchbook watercolours painted on the Isle of Tiree in 2017.
Todi, Umbria A4 on handmade deckled edged watercolour paper.
Grey Street, Newcastle.
Tonight’s view from my studio window above my drawing board.
Loading Comments...
%d bloggers like this: