The business of art is conducted much like any other commercial venture, in which something is bought, sold, or traded, yet a work of art is not a commodity in the ordinary sense of the word…

For artist Alan Reed, who regularly showcases his work through exhibitions in galleries across the world and in a permanent space in his home in Northumberland, it wasn’t until an opportunity presented itself in 1996 as part of the Arts Council’s “Arts 2000” project which sought to celebrate the artistic achievements of artists across the country from 1990 to the year 2000 that Alan considered the business of selling his art and a new commercial venture.

It was an exciting time for all involved as the year 1996 was “won” for the North East by the regional art association Northern Arts. Bringing together the counties of Cleveland, Cumbria, Durham, Northumberland and Tyne & Wear, the region prided itself on listing more than 3000 exhibitions, events, commissions and residencies from March until December 1996. It was during this time that Eldon Gardens approached Alan about potentially installing his artwork in a “pop up” style gallery in their busy shopping mall. 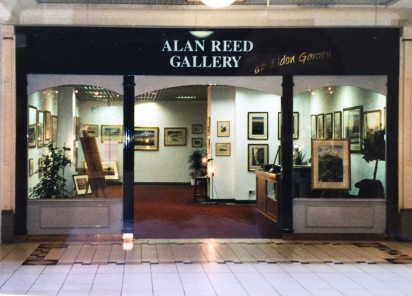 For six weeks, an empty unit within Eldon Gardens was transformed into a hive of activity – attracting shoppers, art lovers and tourists to the region, resulting in a phenomenally successful month of sales for Alan Reed Art and a boost overall in the community’s interest and perception of art. As the six weeks quickly drew to a close, Alan and Susan discussed the idea of opening a gallery full time within Eldon Gardens, having been inspired by the Arts Council’s initiative.

With its crisp white walls and striking black exterior, neither Alan nor wife Susan could have imagined what the future had in store for the “Alan Reed Gallery at Eldon Gardens”.

As the gallery flourished, Alan and Susan decided it was time to take another trip to Italy, this time to explore the idea of meeting a printer/publisher who could help promote Alan’s artwork across Italy – an idea inspired by the success of his Venetian themed artwork in an earlier exhibition “A Tale of Two Cities” at the Malcolm Innes Gallery in Edinburgh.

The couple arranged to meet with a gentleman in Rome, whilst staying at a hotel in Campo de’ Fiori in Rome to discuss their idea. After two hours’ discussion, the couple had lots to think about and the week away spent exploring a new Italian city gave Alan the opportunity to sketch and further build his portfolio of Italian-inspired artwork.

Having browsed various shops and markets for art to bring home as a souvenir of their trip, Alan and Susan were surprised to discover there were very few original paintings or prints they could buy, instead choice was limited to old engravings or amateur watercolour paintings sold for the equivalent of a few pounds at the local market.

In a twist of fate, Alan and Susan got into conversation with a couple from the South of the UK at the airport on the way home, who shared their frustrations that they couldn’t find any original artwork or good quality originals of Rome to take home as a souvenir. Laughing that he actually had some sketches in his luggage, the couple promised to visit the new Alan Reed Gallery in Newcastle and take a look.

True to their word, the couple they met in the airport did pay a visit to the gallery and buy a print from Alan’s ever-expanding “Italian Collection” of paintings which also included scenes from Tuscany, including San Gimignano, Siena and Florence.

What Alan and Susan soon realised is that they’d spotted a gap in the market for high quality paintings or sketches of Italy, and so Alan met with his printer Di Rollo whom Alan had worked with to publish his paintings of Edinburgh from 1993 onwards.

Di Rollo spotted some of his Newcastle scenes in the Malcolm Innes Gallery in Edinburgh and the pair began chatting about the best way to create a series of limited edition prints from his original artwork to solve the problem. Giclée prints* had not yet become the popular, mainstream way of printing or reproducing original artwork as they are today and so the pair decided on a lithographic method to reproduce the prints.
*(Giclée prints were a revolutionary new way of accurately reproducing paintings, drawings or artwork and has become very popular with artists wishing to sell their art to a wider audience.)

With the new gallery flourishing, his mind swimming with inspiration from another insightful trip to Italy and an exciting new distribution opportunity in the pipeline, 1996 was an exciting chapter in the story of Alan Reed Art – and one that continued right up until 2002 when Alan and Susan decided to relocate the Alan Reed Gallery back to their beautiful home in Northumberland.